Home » Blog » The Importance of Seasoning Your Firewood

The Importance of Seasoning Your Firewood

Fall weather is amazing, and it’s just around the corner. The days stay warm but there’s a cool feel to the nighttime breezes, and one thing 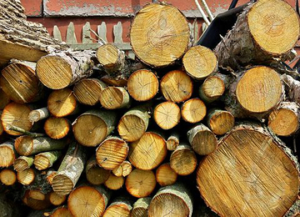 that feels so good is to take the chill out of the air by burning a fire in your fireplace, whether it’s indoors or outdoors. Before you start that fire, though, you need to consider where your firewood is coming from. If you are fortunate enough to have someone that wants to get rid of some trees, and if you love the physical activity that chopping and splitting wood brings, then getting wood is no problem, and this lets you know exactly how old the wood you’re burning is. But if you purchase your firewood, you really have no idea how long it’s been since that wood was cut. It’s very important to burn wood that has been cured, or seasoned, properly.

When you cut a tree and split it into burning sized pieces, much of the water that was in that tree remains. If you were to burn the chunks immediately after cutting it, it would be difficult to get the fire going and the fire that was produced would put off a lot of smoke as the moisture was released in the form of steam and smoke. The burn would be less hot and less efficient, and your room would likely be filled with smoke. That’s why it’s so important to let your wood season, or cure for at least six months, and longer is better. Ideally, your wood moisture content should be under 20% to get an efficient fire burning.

Another reason that you’ll want properly seasoned wood is because it will create less creosote buildup in your chimney. Creosote, that gunky, highly flammable material that accumulates in your chimney over the course of time, comes when the moisture that is in wood is released in the form of smoke and other chemicals released through the burn. When this moist smoke hits the cool interior of your chimney, it condenses, forming creosote. Even as little as an eighth of an inch of creosote is enough to cause a chimney fire if a spark happens to hit it. It stands to reason that the higher the moisture content in the wood, the more creosote is going to form.

To properly season your firewood, make sure that you cut or buy it early. Split your firewood right away, so that more sides are exposed to the open air, which will speed curing time. Also, always stack your firewood on a pallet, never the ground, and stack it loosely, so air can flow through and speed drying time. If you live in an area where precipitation is likely, cover just the top and down the sides a couple of inches of the woodpile with a plastic sheet or tarp so that air is still able to circulate through.

Taking the time to make sure your wood is properly seasoned will save you time and work later on. For more tips on seasoning your firewood or any other fireplace and chimney questions, give Old Dominion Chimneys a call.