Your chimney is an undeniably strong structure. You would think that nothing short of an earthquake could bring one down. That’s why it’s so surprising to people when they realize that something much gentler can have a damaging effect. Precipitation. Precipitation isn’t the only thing that can wreak havoc on your chimney. The very thing your chimney is made to hold, smoke, can breakdown the mortar of your chimney. 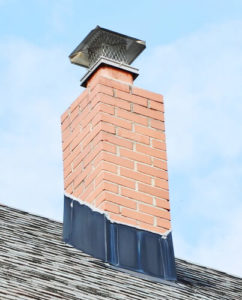 Smoke, the byproduct of burning fire, is made up of the moisture that is in the wood plus a wide variety of chemicals. As this rises, it hits the cooler interior surface of your chimney, where it condenses and forms creosote. Creosote can either form a hard, black layer or a brown, sticky gunky layer. This is highly flammable, and even an eighth of an inch of buildup can catch a stray spark or ember and cause a devastating chimney fire.

A bigger problem is that sometimes there’s not enough oxygen in your chimney for a roaring fire to occur. This sounds like the opposite of a problem, right? But if a fire occurs and the homeowner isn’t aware of it, there could be some major structural damage and the homeowner won’t think to call a chimney inspection company to check it out. That’s why it’s so important to call Old Dominion Chimneys to have your chimney inspected on a yearly basis. But just the chemicals, either in the form of smoke or creosote, can eat away at the surface of your chimney as well, wearing away the surface of the mortar or the brick.

Precipitation can also get into your chimney and wear away the surface of your bricks and mortar. If there’s a crack in the chimney crown, if your chimney cap is rusted or broken, or if the flashing is ripped or torn and precipitation is allowed to trickle in, that trickle can, over time, wear down the structure of the chimney.

Smoke and precipitation are two reasons that it’s so important that your chimney is lined. Most chimneys have a liner, and many of these are made of clay tiles. These are great, but they can, over time, chip or crack or even pull apart from each other, leaving gaps that leave your chimney exposed. When you call Old Dominion Chimneys, we’ll check out the interior of your chimney and the condition of your chimney liner. If the tiles aren’t in great shape, we’ll suggest relining your chimney, and a stainless steel liner is a great option. Stainless steel has several advantages. It is great for either gas or wood burning appliances, and if it’s properly installed, it can cause your fires to burn more efficiently.

When it’s time to think about a new chimney liner, give Old Dominion Chimneys a call. We are experts at installing chimney liners, and we can get you the perfect liner to meet your needs. Give us a call soon for an inspection, cleaning, and any other chimney needs you have.