Chimneys seem like such indestructible structures. They can withstand many elements and not budge. But although they appear to be indestructible, they actually aren’t. There are many things that can cause damage to your chimney, and it’s important to keep it inspected and cleaned on a regular basis to make sure that damage hasn’t occurred or worsens. There are some signs that you, the homeowner, can be on the lookout for that could signal damage has occurred as well.

Give it a Visual Check 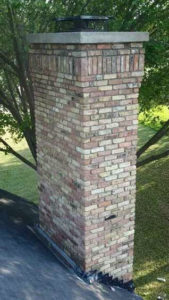 First, see how the exterior of your chimney is holding up. One sign that some masonry damage has occurred is spalling. Spalling is when the bricks or mortar of your chimney start to flake off. When moisture enters the bricks or mortar of the chimney, it causes weakening to occur, and as this weakening gets more advanced, your bricks and mortar can start to peel and flake. In severe cases, you may even see these flakes on the ground around the chimney. If this is the case, you’ll want to call in chimney professionals like Old Dominion Chimneys to see if they’ll recommend tuckpointing or some other type of major repair.

Another way that your chimney masonry could have sustained damage is if you’ve had a chimney fire already. Believe it or not, you could have had a chimney fire and not even known it took place! Most of us think that a chimney fire is a catastrophic, unmistakable event, and sometimes it is. However, many chimney fires actually don’t get enough oxygen to develop into a roaring blaze. Instead, they burn out while still contained in the chimney. Even if this is the case, there is still potential for serious damage. In fact, it may be even more dangerous because you don’t know it’s happened, and there may be structural damage that has occurred that could lead to even more damage when you use your fireplace. Old Dominion offers in-depth inspections, including video inspections, to help determine if you’ve had a chimney fire and, if so, how much damage has occurred.

If you notice that your damper system or other metal parts of your fireplace and chimney are looking rusty, this is another sign that there may be a leak somewhere. When you’re checking on this, check out the wallpaper and ceiling covering your fireplace as well. If these areas seem water stained, weakened, or peeling, leaks may be present.  To really know if you have chimney damage and what to do about it, give Old Dominion Chimneys a call today to set up an inspection. You’ll be able to rest easier knowing that your fireplace and chimney are in their capable hands!