Did you know that there are three levels of chimney inspections? Most people assume that when they call a chimney sweep for an annual inspection and cleaning that it’s a simple glance over of the actual fireplace and chimney to see if there is any outward damage, followed by a quick clean up of soot and dust. If this is what you’ve experienced with a chimney sweep company, then it’s time to give Old Dominion Chimneys a call so that we can dig in and give your chimney the inspection and cleaning you deserve. 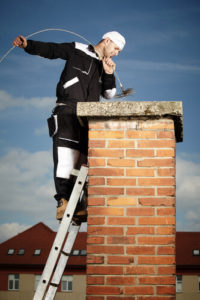 First, if you have been conscientious about getting your chimney inspected and cleaned on an annual basis, chances are that all you’ll need is a Level One chimney inspection. At this level, we will come in and look over the chimney system for obvious external damage to your chimney and do a scan of the interior of your chimney to make sure that there is nothing that can be detected in areas that don’t require digging too deep. In other words, the areas that are “readily accessible” to our workers. After this, we’ll give your chimney a good cleaning to get rid of creosote buildup and you’ll be good to go.

If, during the course of the video inspection, we find that there has been damage to your chimney, it will indicate that we need to do a Level Three inspection. One way that your chimney might have been damaged is through a chimney fire. You might think that a chimney fire would be an obvious event, but in most cases that isn’t true. Most chimney fires don’t get that far because there isn’t enough oxygen in the chimney to keep the fire going. This is dangerous because there may be damage to the interior of the chimney that could cause more damage if left unchecked.

If you’re looking to have your chimney video inspected, give Old Dominion Chimneys a call. We have the video equipment to do a thorough job and make sure that your chimney is free from damage. If we find anything, we can set up an appointment to get your chimney back up and running so that your family is safe and sound.