Home » Blog » How to Fix a Smelly Chimney

How to Fix a Smelly Chimney

The smell of a crackling fire in your fireplace is just amazing. It can bring up memories of cozy evenings spent with family and friends, warm and toasty on a cold winter’s evening. However, what about during the rainy, warm spring days? Does your fireplace still smell as amazing? Unfortunately, warm air and moisture, plus a chimney that needs to be cleaned can sometimes add up to just the opposite. You end up with a chimney and fireplace that stink! Don’t despair if you find yourself in the position of having a smelly fireplace: help is just a phone call away! 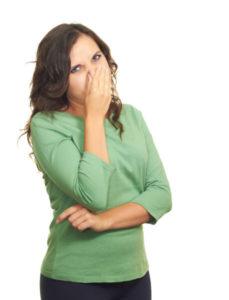 The first thing you’ll want to do if you notice your fireplace smells less than awesome? Find the source of the stink! There are several things that may be causing odor to emanate from your chimney. One of these things is caused by the stack effect. As you know, warm air is lighter than cold air. So, when you light a fire in your fireplace, the warm air rises, which forces the cooler air down. This is also known as draft, and this is what gets the smoke out of your house through the chimney. In the summer, however, the reverse stack effect can take place. This causes a back-draft in which the air will flow into the room, instead of going out of the chimney.

After months of using your fireplace, it’s impossible to avoid a layer of creosote build-up on the inside of your chimney. As your fire burns, it gives off water vapor and other gases that leave your home through the chimney. As these gases hit the cooler top part of your chimney, they condense and form a thick, gooey layer of muck. This substance is called creosote. It is highly flammable! Not to mention, if it catches a spark from a fire, can cause a chimney fire!

Another side effect of creosote build-up? It can be the source of odor coming from your chimney, especially in the summer. When the heat and humidity of summer hit, that humid air mixes with the creosote in your chimney, which causes a smelly mess. When back-draft occurs, this odorous air is forced down your chimney and into your home. A simple solution to this? Make sure your dampers are shut! Also, a more permanent and better solution? Have your chimney thoroughly inspected and cleaned by a certified chimney expert from Old Dominion Chimneys!

Another cause of odor in your chimney? Some sort of animal or bird has taken up residence there. Your chimney is a natural attraction for certain animals and birds; it’s out of the way of wind and other predators. Although, when these animals live in your chimney, they will leave droppings – and that can smell. Worse yet, if an animal falls into your chimney and can’t get out, it may die in your chimney. This causes an even worse odor. Here again, call Old Dominion Chimneys to send over an expert to take care of animal removal.

Whatever is causing your chimney to smell, give Old Dominion Chimneys a call. They’ll find and remove the source of odor quickly and efficiently!