Home » Blog » All About Chimney Swifts

All About Chimney Swifts

If you’ve looked up and saw a flying gray smudge flying around, then you have most likely seen a chimney swift. This little bird is commonly found in the eastern part of the United States.

Early in our history, chimney swifts nested in hollow trees. As the country became more populated, trees were cleared to make room for residential areas. The new homes were built with brick and mortar. With the rise of stone and mortar chimneys, and chimney swifts began to find home and nest in people’s chimneys. Chimneys are a warm place for them to live and nest, and it’s also a safe place to avoid the elements and predators.

Why A Chimney is Perfect 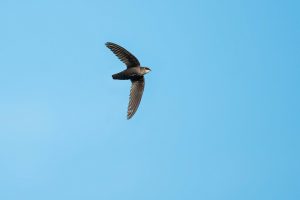 Chimney swifts have tiny bodies and curving wings, and they resemble a gray, flying cigar. The reason a chimney is so important to these birds is because they can’t perch like other birds. Instead, they cling to the sides of hollow structures like hollow trees or chimneys. Because of their inability to perch, they spend a lot of time in flight. In fact, nighttime and nesting are pretty much the only times they are not flying. They even bathe in flight. They get along well in groups, and if they aren’t nesting, they’ll congregate in one chimney to rest and keep warm.

Chimney swifts are slowly decreasing. This is because modern chimneys often have metal chimney liners, which are difficult for chimney swifts to cling to. Chimney swifts are protected by the Migratory Bird Treaty Act of 1918, which makes it illegal to knowingly destroy these birds and their egg-bearing nests. Because of the increasing scarcity of theses birds, some homeowners are even allowing chimney swifts to nest in their chimneys.

Chimney swifts build their nests by gathering twigs and leaves to glue them to the walls of the chimney using their saliva. These nests are small, which means that when these birds leave, the nests won’t be a fire hazard.